Some time ago I read an article about a contest called AFRON design challenge. The target of this contest is to get an affordable robot, with a cost of 10$, for learning robotics in schools.

So I thought it was a good cause to participate. I was thinking in a very simple autonomous robot (Traditional category in the contest), so I had the idea that a good point of departure to learn is a light follower: the robot sensors are seeking if there is a light source and when they find a light the robot goes toward it.

I looked for the components, made the robot and at the end I have finished to L.I.O.S. (light input output system).

All images (except components and tools) in this article can be zoomed by clicking on them.

The wheels and chassis are made of cardboard from a recycled box. The sensors are LDR, the motors are two modified servos for continuous rotation, the brain is a pic 12f683 microcontroller, it has two led diodes to indicate the state and a lipo batery to power the system.

When battery is plugged, the leds blink several times. The microcontroller is checking continuously the two LDR, if it detects a high light intensity in one of them, then it turns on the led at the same side that the LDR and activates the opposite side’s servo (if the light source is at right, then the left wheel is which has to move and viceversa); if both sensors detect the light, then the two leds are turned on and both motors are activated to go straight forward; if it doesn’t detects light then the robot remains stopped and the leds are turned off.

The robot is designed to be builded from scratch with common and accesible components and tools.

Students build an entire robot in a short period of time.

They learn electronics, mechanics and programming.

They study the differential wheeled motor.

They obtain microcontroller programming skills (in this case in C language).

They are able to use CAD software to design electronics or structures.

They are able to interpret schemas.

They can test how the light changes the resistor value in a LDR.

They can measure the voltage and current with a multimeter.

They can recycle components.

The can modify and improve the robot with their own ideas.

And probably the most important: When they sets out to do something, they achieve it.

The battery is the only component you will have to replace. The life cycle of lipo battery is about 400 charges before get rid of it in household waste recycling centre.

Print the first layer of this DXF template to scale 1:1. I have used an open source application called LibreCad. Click to zoom: 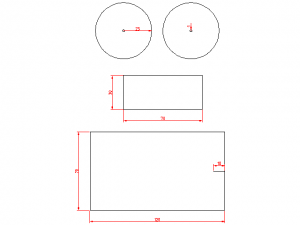 This is the electronic schema. I have used an open source application called Fritzing. Click to zoom: 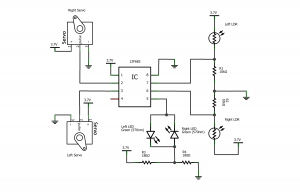 The servos include electronics to manage their rotation direction and have gears to increase their traction strength, however they only can rotate 180 degrees, so we have to modify them to become in a continous rotation motor.

First of all is to strip extracting the 4 base screws and detach the top and bottom covers: 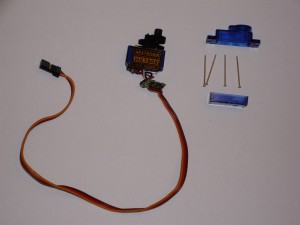 Then you have to extract the gears. One of them has a tab for making contact and don’t advance anymore (marked as a red circle): 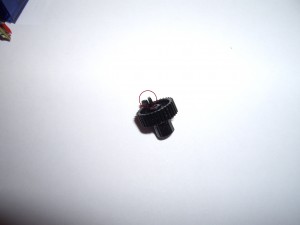 This is the result after cutting the tab: 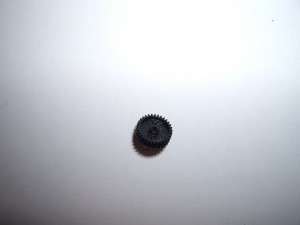 The servo has a POT. We have to desolder the wires (green arrows) and break the wall which contains the two making contact tabs (red arrows): 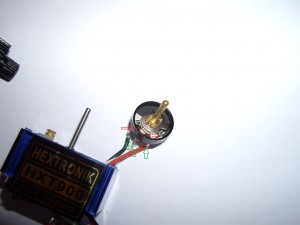 This is the result after breaking the wall: 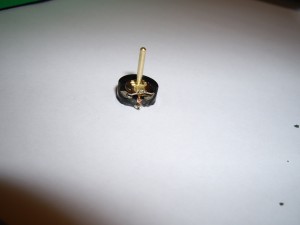 The next step is to solder the two 10KΩ resistors making a voltage divider with the previous step’s desoldered wires (the white wire goes between the two resistors). To isolate the contacts use heatshrink sleeve: 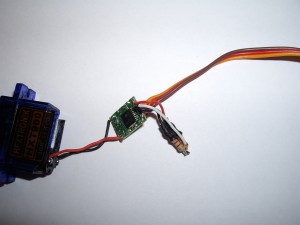 Isolate the other end with heatshrink sleeve: 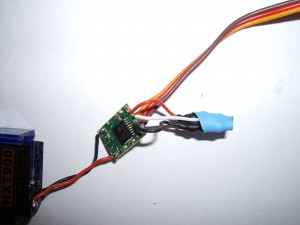 Finally join all gears again, insert the electronics, put the covers and screw on: 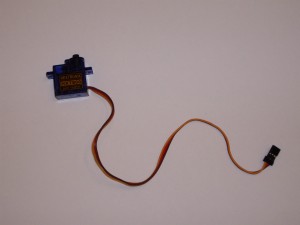 Stick the template paper to the cardboard with adhesive tape. Pierce the little circles with a needle and cut the lines with the trimming knife. 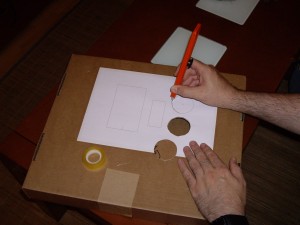 After that, insert the needle trough the wheel hole, Put some glue in the straight servo arm and introduce its central hole by the needle until making contact with the wheel. Repeat the process with the other wheel: 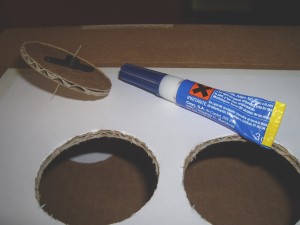 Remove the sticker from left servo’s side, put some glue in that lateral and stick it on the big cardboard surface at the top left end. Repeat the process at the other side with the other servo: 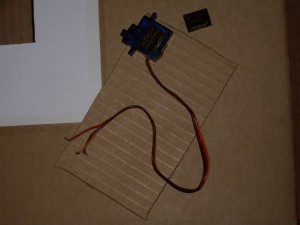 Cut slightly the small cardboard surface by the one third, put some glue there and stick it to the incision made before in the big cardboard surface (according to the template). Place the two wheels to the axis of the servos: 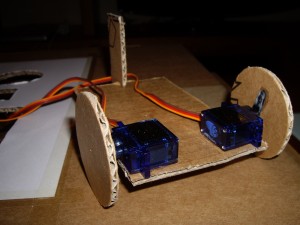 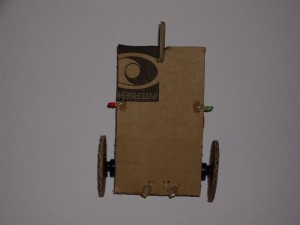 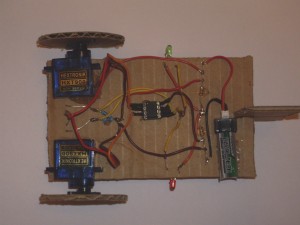 This robot can’t be sent to build in mass.

From here you can download the source code of the PIC firmware (GPL licensed). If you want to understand the running of the registers of PIC 12F683 , the best is to read the datasheet.

From here you can download the .hex file to program the PIC.

The compiler I have used is SDCC, which is free software. I have typed the following command to compile it:

When you want to upload the .hex file to the pic you have to own a PIC programmer and a software that manages the programmer. There is a lot of variety. I have used the pickit3 from Microchip and its software for windows, but there are other alternatives more cheaper that can be used with free software or freeware for linux, mac and windows.

The timer0 and ADC interrupts are activated. The timer0 interruption is configured for triggering each 0.1 ms.; its functionality is to count the servos timings. The ADC interrupt is triggered each time the ADC conversion is finished; its functionality is to activate the associated led (if a threshold exceeds), put a value in a state variable, change the ADC channel and read the next LDR.

You can see some pictures along the article.

The robot sensors are LDR, but they could be changed by two CNY70, obtaining a line follower robot with the next schema: 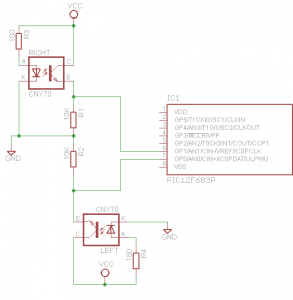 You have to change in source code the line

Also the sensors can be changed by two snap action switch, obtaining a clashes detection robot with the next schema: 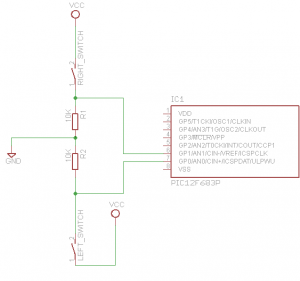 In this case you don’t need to change any source code.